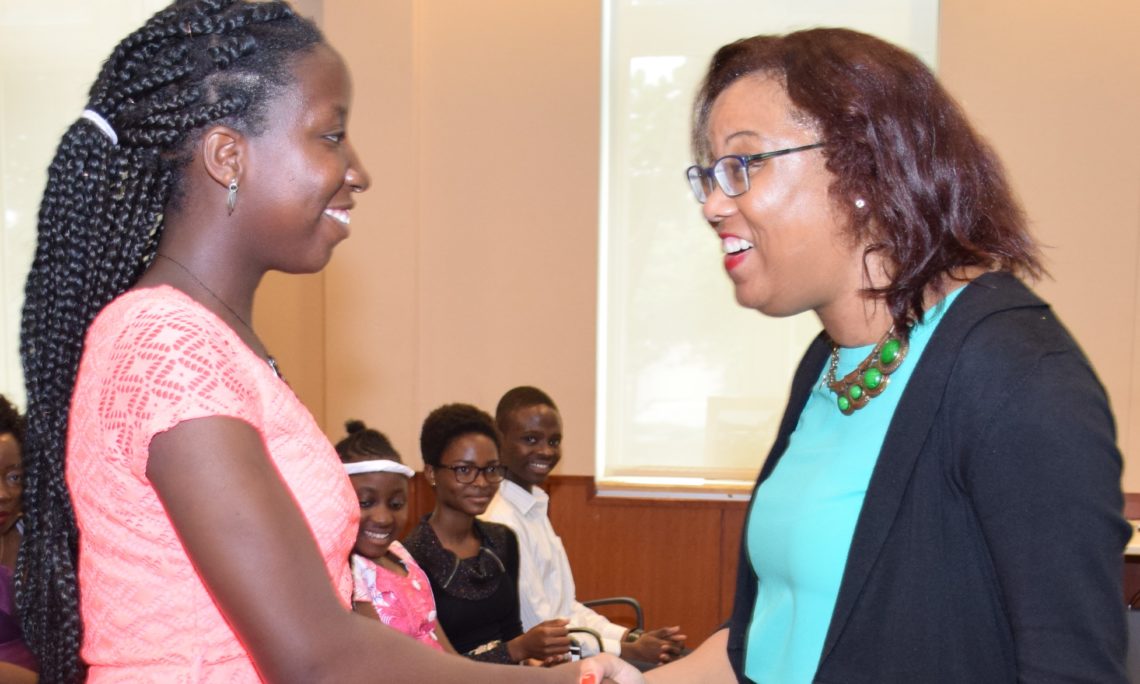 On June 17, 2019, nine Cameroonian students of the 2018-2019 Kennedy-Lugar Youth Exchange and Study (YES) program visited the U.S Embassy to share their stories and experiences of their one-year study abroad in the U. S. along with their program director Francois Donfack and their parents. They met with Deputy Chief of Mission Vernelle FitzPatrick, the Public Affairs Officer Lee McManis, and Cultural Attaché Will Romine.

As part of their program, the students were placed in these states: Indiana, Wisconsin, Nebraska, North Carolina, Kansas, Hawaii, California, Maryland, and Utah. During their welcome back session at the Embassy, the 2018 YES alumni shared memorable aspects of American culture most, notably the friendliness of Americans and the vast academic resources available to students.  One student who attended Summerville High School in Mi-Wuk Village, California, said her take home idea is “never be afraid to take initiatives, develop projects and execute them for the common good.” Another who attended Hillside High School, Durham North Carolina explained that through involvement in club activities, she developed communication skills and learned to compete. As a member of the debate club, she improved her English language skills. One of the students who schooled at Parker School in Kamuela, Hawaii was an asset in his school. He played soccer and was an assistant French teacher. Both the French teacher and students appreciated his contributions in enhancing speaking skills of learners. One of the 2018 YES alumni who attended Homestead High School in Thiensville, Wisconsin, was transformed from a shy introvert and she auditioned for a play and joined the track and field sports group in her school. Her community engagement increased after attending the civic education workshop in Washington DC.  A student who attended school at Venture Academy in Farr West, Utah was motivated to volunteer in catering for children in a church in spite of her Muslim background, underscoring the fact that people are the same regardless of differences in religion and culture.

In her welcome back remarks, the U.S. Embassy Deputy Chief of Mission, Vernelle FitzPatrick, congratulated the students for their selection and participation in the program. “You represent the best of Cameroon—la crème de la crème, de la crème. By attending high school in America you learned a lot about yourselves, and educated Americans about Cameroon and Africa. Today you are part of a special network working to promote mutual understanding among Americans and Cameroonians. Share the best of American culture and make it your own.”

The Public Affairs Officer, Lee McManis in his closing remarks encouraged the YES Alumni, to work together and put the knowledge and skills gained through the program at the service of their community. “A rising tide lifts all the boats.” Mr. McManis said.

Funded through the U.S. Department of State and sponsored by the Bureau of Educational & Cultural Affairs, the Kennedy-Lugar Youth Exchange and Study (YES) program provides scholarships for high school students from selected countries to spend up to one academic year in the United States.  YES participants live with host families, attend high school, and engage in activities to learn about American society and values, acquire leadership skills, and help educate Americans about their countries and cultures.

For more information on the YES program, visit http://yesprograms.org/