Emergency Information for American Citizens
Visa Information Update
PreviousNext
Emergency Assistance
Local Emergency Information and Contacts
Alerts for U.S. Citizens
Read alerts for U.S. Citizens
Visit Travel.State.gov for More Information
New Guidance for Visa Pickup
Beginning May 18th 2022, All approved visas will be picked up from DHL Yaoundé Immeuble Stamatadas Building, Hypodrome/ Hotel de-Ville. There is no additional fee for this service.
Pick-up times
The applicant may pick up their visa at their convenience: Monday to Friday 08:00 – 17:00 or Saturday 09:00 – 14:00.
Contacts for Questions and Concerns
Please contact DHL at +237-233-500-900/01/02/03 or fae_contactus+cm+info+en@visaops.net with any question or concerns.
PreviousNext
Independence Day Speech As Prepared for Delivery By Ambassador Christopher J. Lamora
Friday, July 8, 2022
By U.S. Embassy in Cameroon
10 MINUTE READ 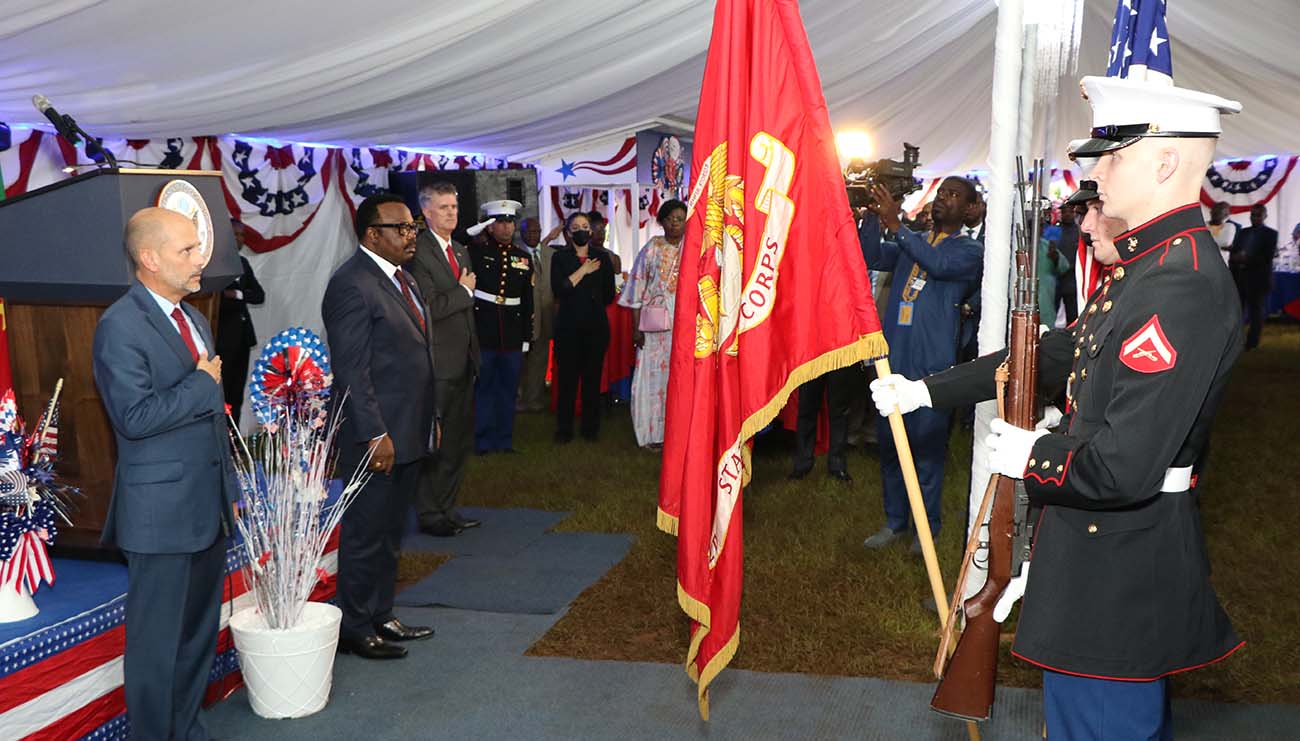 Distinguished guests.  Good evening, and Welcome to the U.S. Embassy.

This is my first Independence Day as Ambassador to Cameroon and I’m truly humbled to see so many colleagues, friends and partners here today, including some I’ve met since arriving in March and others I’ve known for 30 years.

This is also our first in-person Independence Day reception since before the COVID-19 pandemic.  The pandemic isn’t over, and we must continue to take appropriate precautions.  But with transmission rates low and vaccines widely available, today’s celebration of our 246th birthday as a nation is an opportunity to come together and to reflect on U.S.-Cameroonian relations and our world.

So today represents the promise of a new beginning.  But it is a beginning built on strong, established foundations.

The United States and Cameroon have a deep and enduring relationship touching on countless vital issues that matter to Cameroonians and Americans alike.  And the U.S. Embassy team and I are proud to work alongside our Cameroonian partners, achieving many great things together.  Just to highlight a few:

The United States has invested more than $111 million over the past four years in the fight against malaria, providing prevention and treatment to 1.7 million children in the North and Far North regions.

We have invested more than $500 million since 2013 to fight HIV and tuberculosis and to achieve HIV epidemic control in Cameroon, and we are nearly there.  With continued commitment and partnership, Cameroon is on target to hit this critical milestone in the very near future.

We have directly supported more than 95,000 children in 265 primary schools in the Adamaoua, East, North, and Northwest regions with in-school and take-home meals.

We are one of the largest humanitarian donors in Cameroon, providing emergency food assistance to more than 1.3 million people.

We have partnered with Cameroon to strengthen maritime security in the Gulf of Guinea, and helped train and equip Cameroonian forces in operations against Boko Haram and ISIS West Africa.

Through our premier exchange programs such as the Mandela Washington Fellowship and Fulbright, we have helped train many distinguished members of Cameroonian society, including numerous senior officials of the Cameroonian government as well as businesspeople, civil society leaders, journalists, doctors, and academics.  And we are training the next generation in every sector.  Welcoming this year’s impressive class of 17 Mandela Washington Fellows to my residence here was a true high point of my tenure to date.

And I’m extremely pleased to announce that, later this year, Peace Corps volunteers will return to Cameroon for the first time since before the pandemic, joining the ranks of nearly 4,000 Peace Corps Cameroon alumni since 1962.

These are just a few of the many things that the United States does every day in Cameroon — and with Cameroon — to help build a more peaceful, just, prosperous, and inclusive future for both our countries.

And yet, after four months on the job as U.S. Ambassador, I know that our partnership could be even stronger.  That is our goal.  And we should strive every day to achieve it, together.

Striving to build something better is a common theme in American history.  Since our nation’s founding on July 4, 1776, the United States has served for many as an example of democracy, freedom, human rights, and innovation.  We have welcomed millions of new citizens from every corner of the globe, representing the full array of the world’s religions, languages, and cultures.  Our diversity, like Cameroon’s, is a national strength.

Yet, even today, 246 years later, we don’t always get it right.  We continue to grapple with many difficult and deeply rooted issues such as racism, sexism, and poverty.  And too often, as we saw earlier this week at a Fourth of July celebration outside Chicago, as well as in other recent tragic incidents, we also face violence that can be discriminatory, indiscriminate, or both.

So when we talk about the importance of countries’ improving where perhaps they might do better, we do so not from a place of superiority, but of humility.  Not as a lecture, but as a conversation in which, yes, we are talking, but even more importantly, we need to be listening.

When we talk about democracy and human rights, we do so not from the perspective of a country that has mastered these ideals, because we haven’t.  We talk about these values because we hold them dear even when we fall short.  The United States, like all countries, remains a living, breathing, work-in-progress.

Our democracy and our commitment to the ideals enshrined in our founding documents have been tested in the past, and they will no doubt be tested in the future.  The goal, though, must be to meet these moments with respectful, inclusive, and peaceful discourse.  Only in this way can we advance toward a more just and equitable society.

That is what we strive for.  A more perfect union.

The United States and Cameroon are great countries.  We have much in common and are working together, side-by-side, to advance our shared priorities, including economic growth, good governance, peace and security, and better health outcomes.

As a Cameroonian government official told me, “Common problems in common areas require common solutions.”  I couldn’t agree more.  Many of today’s global challenges transcend borders.  Successfully addressing these complex challenges requires that all of us work together:  governments, business, civil society, students… All of us.

And this very much includes women, who play a critical role and must be engaged at the outset, rather than being left on the sidelines to accept the decisions made by men or asked to participate almost as an afterthought.  I’ve met countless Cameroonian women over the past four months who have taken on critical leadership roles in various sectors, which is to their credit as well as to the nation’s benefit.  But those of us in positions of authority need to be more intentional about seeking out, encouraging, and listening to women’s voices.  We cannot afford to exclude or ignore the wisdom and experience of more than half the world’s population.

As long as we continue to focus on our shared priorities and our many commonalities in a relationship based on mutual respect and honesty, I believe that we can and we will achieve much more together.

That is my vision.  That is my hope.  It’s up to all of us to determine the course and to deliver a brighter future for the American and Cameroonian people.

Let’s strive to make it happen.  Thank you!