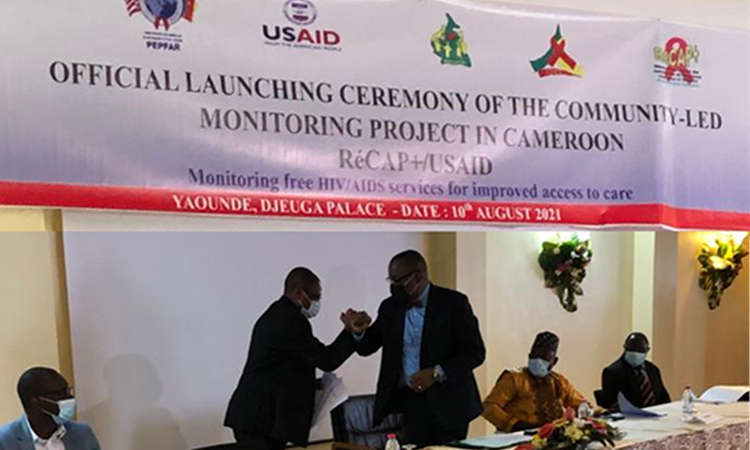 Yaoundé, Cameroon – On August 10, 2021, with the support of the United States Agency for International Development (USAID/Cameroon), the Cameroon Ministry of Public Health, alongside other partners, officially launched the Community-Led Monitoring Project in Yaoundé.  This project is implemented by the Cameroonian network of organizations for people living with HIV (Recap+) which received a grant of CFA 780,470,000 (USD $1.4 million) from the U.S. Government to improve community participatory monitoring systems for HIV services over the next three years in 147 health districts across the 10 regions of Cameroon.

During the ceremony, Prof. Louis Richard Njock, Secretary General of the Ministry of Public Health, renewed Cameroon’s engagement to eliminate HIV user fees in Cameroon and place beneficiaries at the center of health policies.  Dr. Jose Tchofa, USAID/Cameroon Health Office Director, highlighted that ‘‘this project complements the U.S. Government’s larger scale health assistance to Cameroon through the President’s Emergency Plan for AIDS Relief (PEPFAR).  The project will help reduce HIV infection and transmission, ensure all HIV-positive beneficiaries are retained in care, and improve the health and well-being of children living with and affected by HIV/AIDS.’’  The U.S. Government remains committed to supporting Cameroon to end HIV/AIDS as a public health threat by 2030.