Emergency Alert Information for American Citizens
Visa Information Update
PreviousNext
COVID-19 Travel Guidance for U.S. Citizens
The CDC requires all air passengers entering the U.S. (including U.S. citizens and Lawful Permanent Residents) to present a negative COVID-19 test, taken within one day of departure or proof of recovery from the virus within the last 90 days.
Smart Traveler Enrollment Program
Enroll for Alerts
Emergency Assistance
Emergency Information and Contacts
Visit Travel.State.gov for More Information
New Guidance for Visa Pickup
Beginning May 18th 2022, All approved visas will be picked up from DHL Yaoundé Immeuble Stamatadas Building, Hypodrome/ Hotel de-Ville. There is no additional fee for this service.
Pick-up times
The applicant may pick up their visa at their convenience: Monday to Friday 08:00 – 17:00 or Saturday 09:00 – 14:00.
Contacts for Questions and Concerns
Please contact DHL at +237-233-500-900/01/02/03 or fae_contactus+cm+info+en@visaops.net with any question or concerns.
PreviousNext
New U.S. Ambassador to Cameroon- Christopher J. Lamora
By U.S. Embassy in Cameroon
3 MINUTE READ 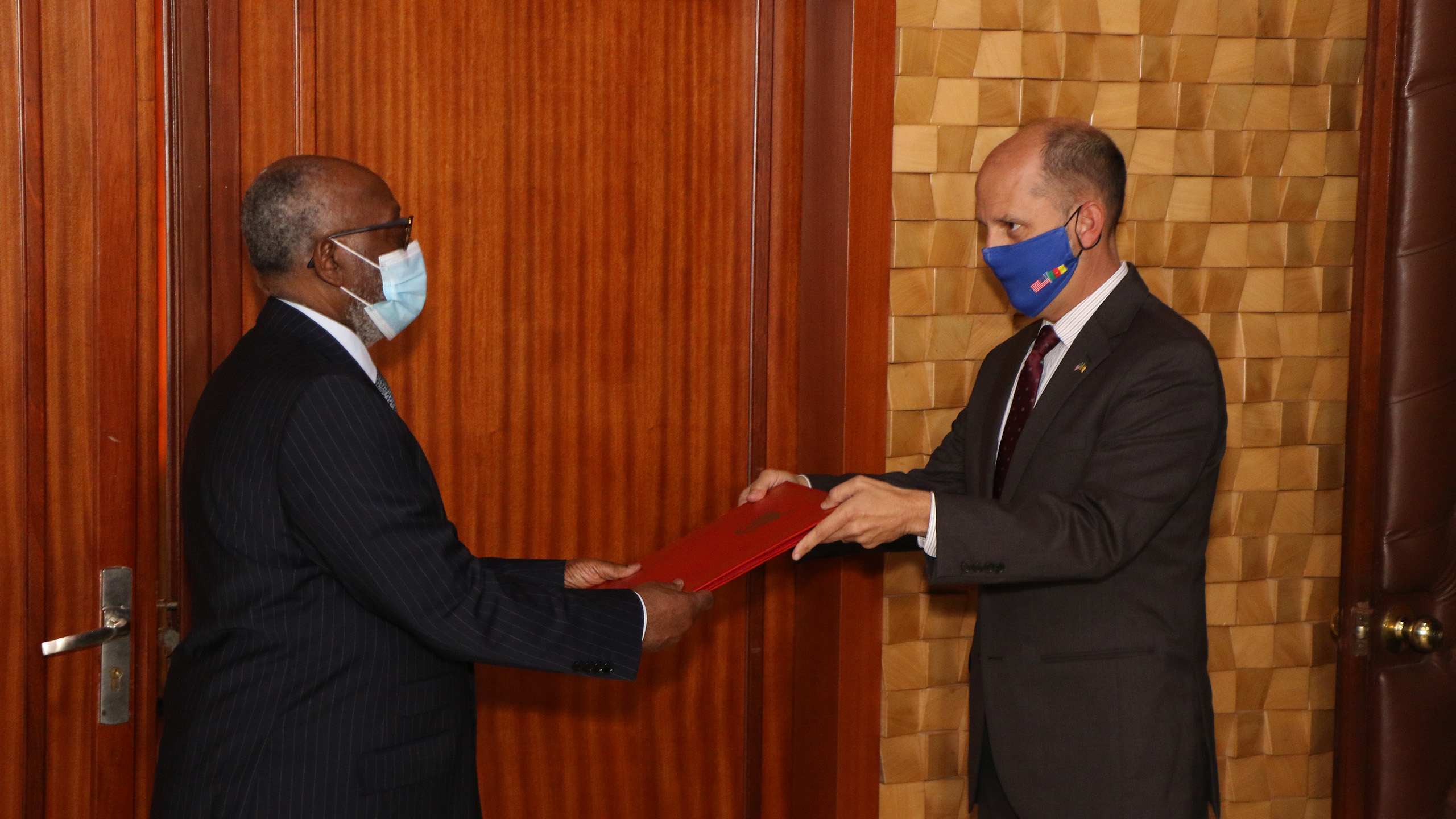 Yaoundé, CAMEROON— The newly arrived U.S. Ambassador to Cameroon, Christopher J. Lamora, met with Minister Mbella Mbella Lejeune of the Ministry of External Relations today to present his credentials and to start his tenure in Cameroon.

Ambassador Lamora indicated his enthusiasm for partnering with the Cameroonian people to address problems that affect both nations, stating, “I am so happy to return to this beautiful country, Africa in Miniature, where I launched my diplomatic career nearly 30 years ago at the U.S. Consulate in Douala. The United States is a committed friend and partner of Cameroon, actively contributing to the country’s development, security, and prosperity, as we have for decades.  Our cooperation spans many areas, including health security, trade and business growth, environmental protection, humanitarian assistance, academic collaboration, and fighting piracy, human trafficking, and terrorism.  Cameroon faces several serious challenges.  We have many areas of mutual interest and while we may not always agree on all issues, the United States is and will remain a friend to Cameroon and its people.”

Ambassador Lamora is a career diplomat with three decades of experience in Africa, including in Cameroon where he previously served.  His most recent assignment was as the Chargé d’Affaires, a.i. at the U.S. Embassy in Equatorial Guinea.  Prior to that, he was the Deputy Chief of Mission at the U.S. Embassy in Ghana from 2018 to 2021.  Prior to his tour in Ghana, Ambassador Lamora spent eight months as the Acting Deputy Assistant Secretary of State for Central Africa and African Security Affairs.  His complete biography is available here.