Emergency Information for American Citizens
Visa Information Update
PreviousNext
Expired Passport Information
After June 30, 2022, U.S. citizens who are overseas and planning to return to the United States will no longer be able to use an expired U.S. passport to enter the United States.
COVID Testing Requirements
Air travelers to the United States no longer need to show proof of a negative COVID-19 test for entry.
Alerts for U.S. Citizens
Read alerts for U.S. Citizens
Emergency Assistance
Local Emergency Information and Contacts
Visit Travel.State.gov for More Information
New Guidance for Visa Pickup
Beginning May 18th 2022, All approved visas will be picked up from DHL Yaoundé Immeuble Stamatadas Building, Hypodrome/ Hotel de-Ville. There is no additional fee for this service.
Pick-up times
The applicant may pick up their visa at their convenience: Monday to Friday 08:00 – 17:00 or Saturday 09:00 – 14:00.
Contacts for Questions and Concerns
Please contact DHL at +237-233-500-900/01/02/03 or fae_contactus+cm+info+en@visaops.net with any question or concerns.
PreviousNext
Remarks Girls4Girls Leadership Symposium 2019
By U.S. Embassy in Cameroon
7 MINUTE READ 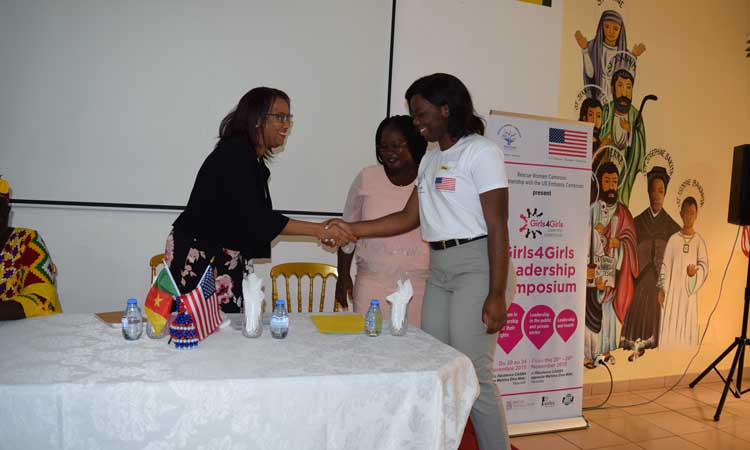 Good morning and thank you for inviting me to open your symposium.  I would like to give special thanks to Dr. Marie-Therese Abena Ondoua, the Minister of Women’s Empowerment and Family, and Mounouna Foutsou, the Minister of Youth Affairs and Civic Education.

I want to begin by telling you two stories.  The first story is about a young girl who lived in the 1950s in the U.S. state of Mississippi.  At the age of three, her mother left her to be raised by her grandmother.  Their household was poor; flour sacks doubled as clothes, and dolls fashioned out of corncobs were the only toys she had.  Her mother eventually found work as a maid in a different state and sent for her daughter, but the long hours and low salary meant that her mother was largely absent from her life.  This young girl was sexually abused by several family members and a family friend starting from the time she was nine years old, but did not speak up at that time about her suffering.  At age 13, she ran away from home and at age 14, she became pregnant and delivered a child who was stillborn.

Now let me tell you a story about a girl who grew up in a loving household.  At an early age, her grandmother recognized her innate gifts and nurtured them.  By age three she was fully literate and by age five, she could recite bible verses to packed churches with such confidence that she earned the nickname, “Preacher.”  Her father prioritized education and pushed his daughter to excel.  Her oratory skills won her a full university scholarship.  In the late 1970s, she moved to the city of Nashville in the state of Tennessee and became the first black female to anchor the local news program, as well as the youngest ever.  She then moved to the city of Baltimore to work as a news anchor and reporter.  She was demoted to lower profile positions and later said of her bosses at that time, “They told me I was the wrong color, the wrong size, and that I showed too much emotion.”

But her career skyrocketed as she moved to bigger media markets.  She was so successful in the city of Chicago, one of the largest cities in the United States, that the network gave her a nationally syndicated talk show, which ran for 27 years and spawned an entire media empire.  Today, that woman is worth 4 billion dollars.

I tell you these two stories because so often we focus on our role models’ successes, without realizing that they too have had to work hard and sometimes had to overcome misfortunes and tragedies.  The Oprah Winfreys of the world aren’t born successful, or wealthy, or even lucky.  Their positive choices and commitment to hard work make them what they are.  They also emerge because someone, a teacher, a mentor, a family member, notices the spark within them and fans it into a flame.

You all have that spark.  You may not want to become a media mogul like Ms. Winfrey, but you are all talented in your own ways.  Today’s symposium recognizes the need for women to support women.  You are all at points in your life where you can build yourself into the person that you want to be, and you are surrounded by those that can help.  Oprah didn’t do it alone, and neither do you.

You all have value and the capacity to succeed, but that value does not count for much unless you’re willing to see it for yourself.  If you work hard, are kind to others, and surround yourself with supportive people, you will develop the self-confidence to let the world know what talented, intelligent, and strong people you are.

Your mentors can help with that.  If life is a race, then men, unjustly, have a 10-minute or more head start.  When you see a man and a woman cross the finish line at the same time, it is generally because that woman had to work harder and endure longer to get the same results.  Based on my own personal experiences, I can say this is especially true in sub-Saharan Africa.  I sometimes go to meetings here in Cameroon where I am the only woman in the room or one of a few, and sometimes I think, where are the women?  I know they are just as smart and talented as the men I encounter in meetings.

I challenge you to find a mentor who has gotten to where you want to go.  Learn from them how to get farther and move faster.  Oprah has said a lesson she wants to pass on to others is that “Your life is not static. Every decision, every setback, or triumph is an opportunity to identify the seeds of truth that make you the wondrous human being that you are.”  To the mentors, I expect you to build a legacy of young women who finished the race first, thanks to your support.  I know you’ll all make me, and the U.S. Embassy, proud.

We at the U.S. Embassy are working to end gender inequality by supporting efforts like today’s symposium, where women support women, to the benefit of all.  This is just one example of the commitment of the United States to a partnership with Cameroon and with all Cameroonians who are working for a peaceful, prosperous, and democratic future.  A future where all members of society have an equal ability to contribute and flourish.  Gender equality does not reduce opportunities for men, quite the opposite.  According to Secretary of State Mike Pompeo, “Societies that empower women to participate fully in civic and economic life are more prosperous and peaceful.”  When you succeed, you not only accomplish your personal goals, but you contribute to Cameroon’s development.

Before the symposium officially starts, I would like to thank the organizers.  Please stand when I call your name so that you get the recognition that you deserve.

Thank you, and enjoy the symposium.