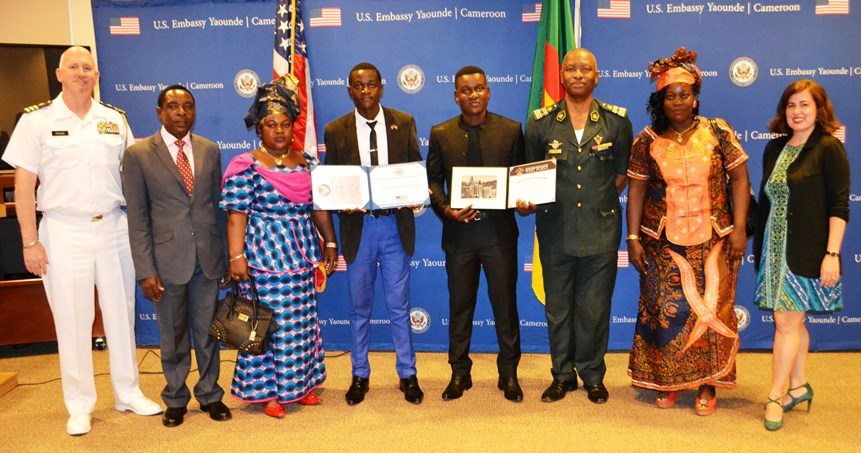 On June 7, the U.S. Embassy in Yaoundé held a send-off ceremony for two young Cameroonians who have been accepted into two United States Military Academies: Lixrine Epie was admitted into the U.S. Military Academy at West Point and Saffo Aurele was accepted into the U.S. Air Force Academy in Colorado Springs. The students were accompanied by their parents who looked on with pride as their children were congratulated for their acceptance into these highly selective institutions. While offering opening remarks, Cultural Affairs Officer Nitza Sola-Rotger noted that the strong participation of Cameroonians in this program through the years is a testament to our countries’ strong cooperation. Defense Attaché Robert Stouse congratulated the students on their achievement, and for overcoming mental and physical challenges to deserve this opportunity. He also thanked the EducationUSA Advisor Richard Ewane, for working with the students throughout the application process, as well as Mr. David Mbila from the Office of Security Cooperation for assisting the students during this process. The ceremony ended with a word from Colonel Nji Nformukong of the Cameroon Ministry of Defense, who also congratulated the students on their achievements. He told them that they have been entrusted with the heavy task of representing their nation in a foreign country and that as the military cadets they now are, he expects that they will make their country proud. Please join us in wishing them safe travels and good luck in their new journey!