Emergency Information for American Citizens
Visa Information Update
PreviousNext
Emergency Assistance
Local Emergency Information and Contacts
Alerts for U.S. Citizens
Read alerts for U.S. Citizens
Visit Travel.State.gov for More Information
New Guidance for Visa Pickup
Beginning May 18th 2022, All approved visas will be picked up from DHL Yaoundé Immeuble Stamatadas Building, Hypodrome/ Hotel de-Ville. There is no additional fee for this service.
Pick-up times
The applicant may pick up their visa at their convenience: Monday to Friday 08:00 – 17:00 or Saturday 09:00 – 14:00.
Contacts for Questions and Concerns
Please contact DHL at +237-233-500-900/01/02/03 or fae_contactus+cm+info+en@visaops.net with any question or concerns.
PreviousNext
U.S. Ambassador Visits Obala District Hospital and Participates in the Mass Administration of Mectizan
To Prevent River Blindness
By U.S. Embassy in Cameroon
3 MINUTE READ

Yaoundé, Cameroon — On September 6, Ambassador Christopher J. Lamora visited the Obala District Hospital to see the U.S. government contributions through the U.S. Centers for Disease Control and Prevention (CDC).  Through the U.S. President’s Emergency Plan for AIDS Relief (PEPFAR), CDC has supported clinical and laboratory services at the Obala District Hospital since 2014.  Over the past three years, CDC has invested over 211 million Francs CFA ($350,000) to strengthen the hospital’s HIV prevention, care, and treatment services for all people living with HIV.The Ambassador and his team later travelled to Minkama III village under the Obala health district to participate in the mass administration of Mectizan to prevent Onchocerciasis (river blindness) and protect the health of 1,587 people living in the village.  This project is supported through the Act to End NTDs | West program funded by the United States Agency for International Development (USAID) and implemented by FHI360 and Helen Keller International. 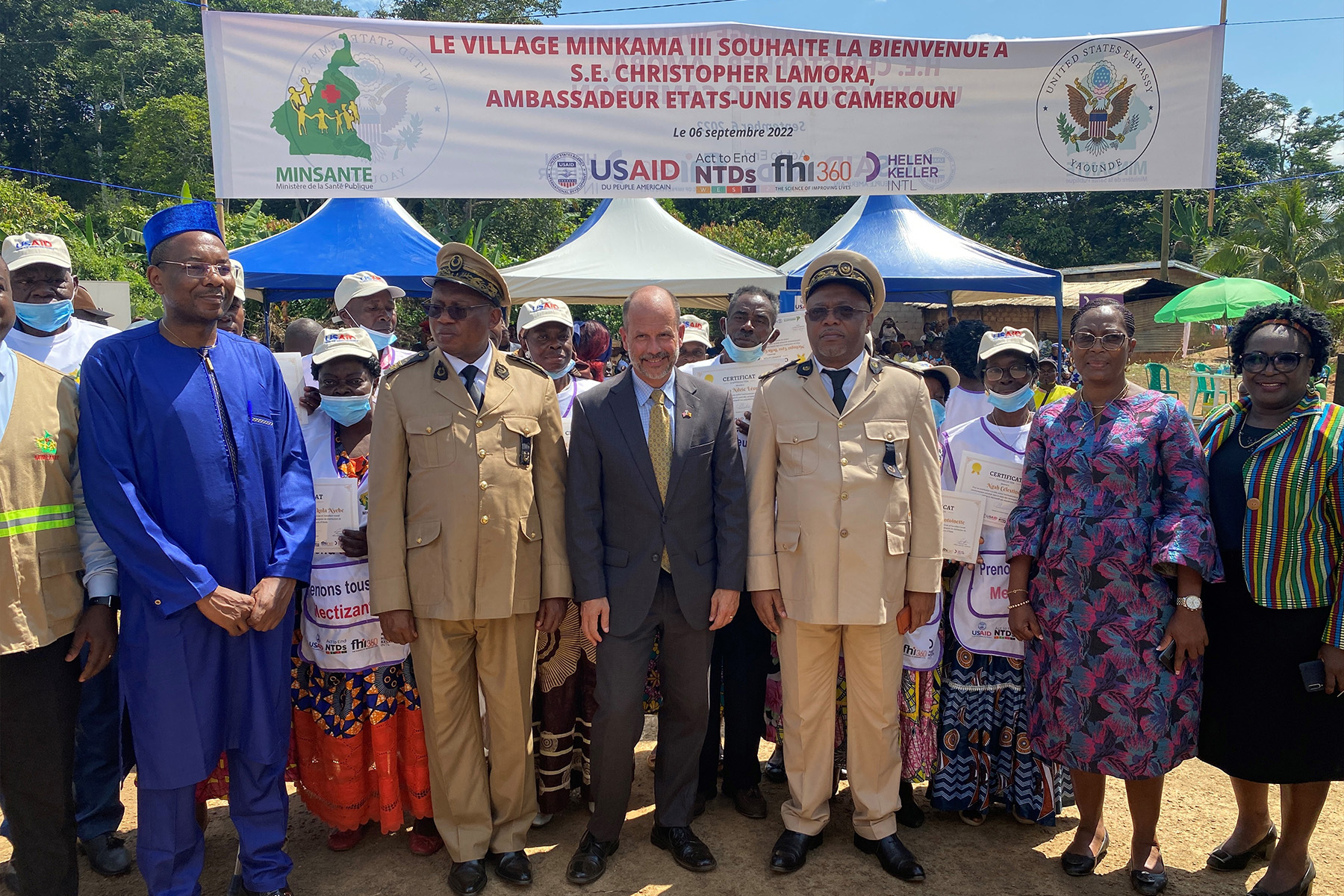 At Minkama III, Ambassador Lamora and Dr. Charlotte Moussi, the Centre Regional Delegate for Public Health witnessed the door-to-door distribution of Mectizan by community distributors and gave certificates of appreciation to 50 distributors for their work over the past 10 years in fighting Neglected tropical diseases (NTDs), particularly Onchocerciasis, in their community.

Ambassador Lamora stated: “It is good to see that regular drug administration campaigns in Minkama have helped reduce the cases of severe elephantiasis and blindness, giving hope for life without Lymphatic filariasis and Onchocerciasis in Cameroon.”  The U.S. government, through USAID, supports delivery of safe, effective medicines to treat NTDs in all 10 regions of Cameroon. 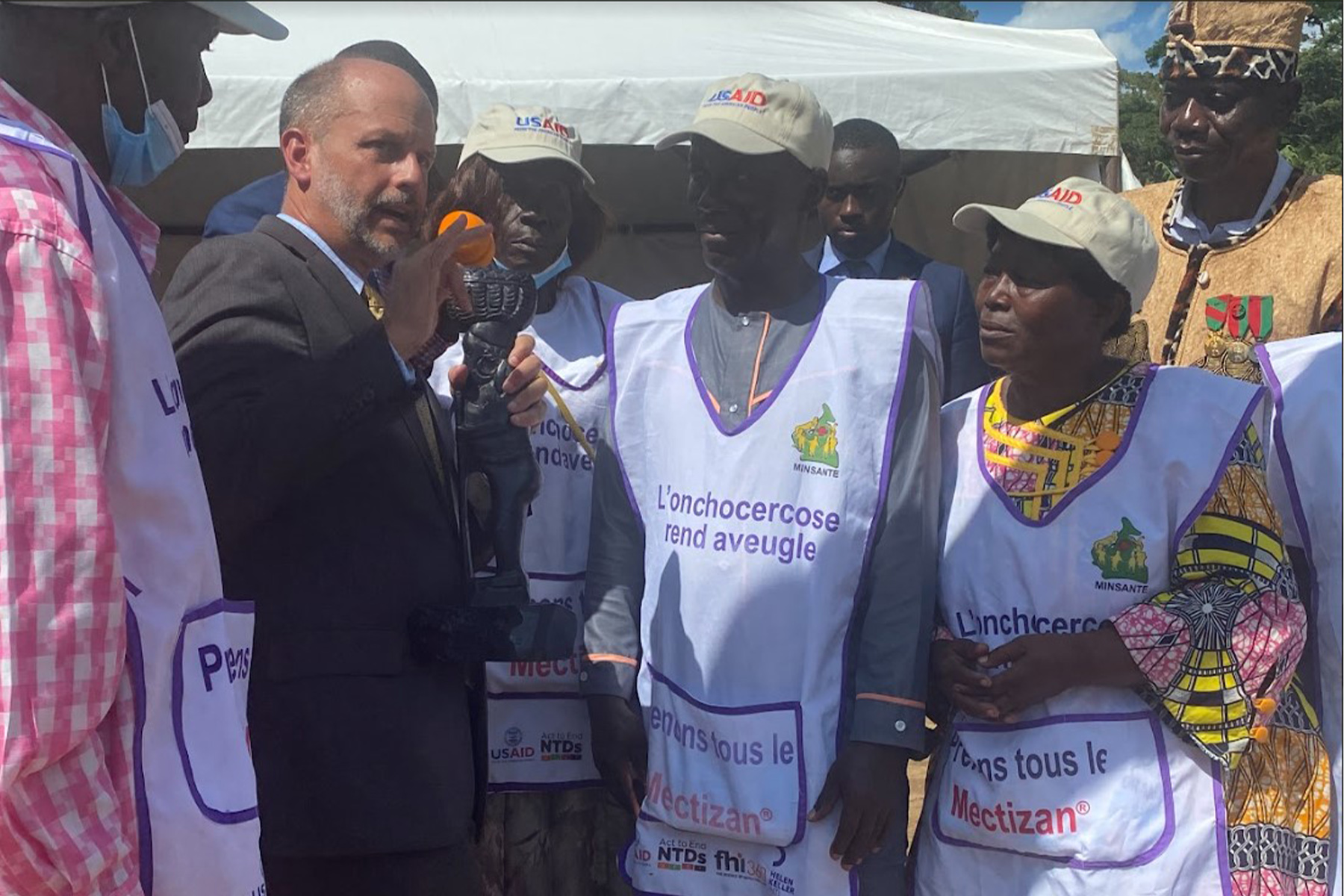 The U.S. Government, through USAID, looks forward to strengthening collaboration with the Ministry of Public Health to control and eliminate NTDs in Cameroon.