Emergency Information for American Citizens
Visa Information Update
PreviousNext
Emergency Assistance
Local Emergency Information and Contacts
Alerts for U.S. Citizens
Read alerts for U.S. Citizens
Visit Travel.State.gov for More Information
New Guidance for Visa Pickup
Beginning May 18th 2022, All approved visas will be picked up from DHL Yaoundé Immeuble Stamatadas Building, Hypodrome/ Hotel de-Ville. There is no additional fee for this service.
Pick-up times
The applicant may pick up their visa at their convenience: Monday to Friday 08:00 – 17:00 or Saturday 09:00 – 14:00.
Contacts for Questions and Concerns
Please contact DHL at +237-233-500-900/01/02/03 or fae_contactus+cm+info+en@visaops.net with any question or concerns.
PreviousNext
U.S. Leadership in Global Fight to Defeat COVID-19
By U.S. Embassy in Cameroon
7 MINUTE READ 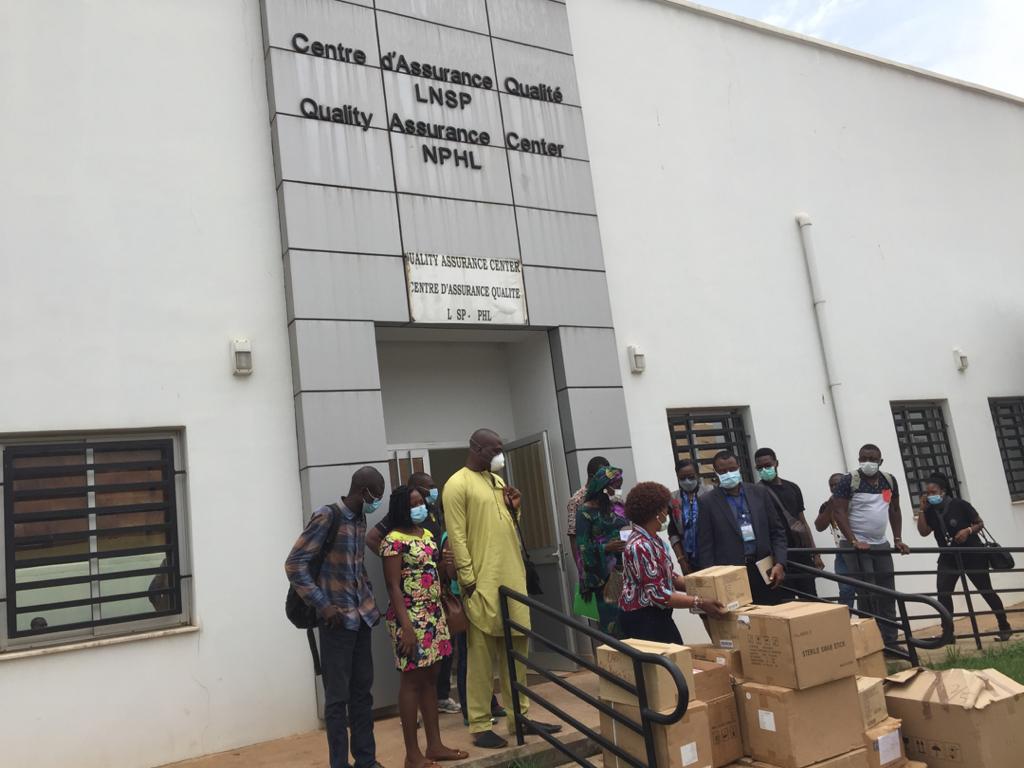 The story of U.S. leadership in the global battle against COVID-19 is a story of decades, months, and days. Every day, new U.S. technical and material assistance arrives in hospitals and labs around the world. These efforts build on decades of American investment in global health. Our record of sharing American scientific expertise, financial generosity, and public health planning resources is unmatched in history.

The United States provides aid for both altruistic and pragmatic reasons. We believe it’s the right thing to do. We also understand that pandemics don’t respect borders. If we help countries improve health systems they can better respond to whatever outbreaks may occur. And that will save lives — abroad and at home in the United States.

That generosity and pragmatism explains why the United States was one of the first countries to help China when the outbreak of COVID-19 began there, sending 18 tons of medical supplies. Since then, the U.S. government has committed nearly $500 million in assistance. More than 60 of the world’s most at risk countries are receiving this U.S. assistance, including Cameroon. The funds for Cameroon will increase infection control in key health facilities, strengthen laboratories and surveillance, prepare communities, and bolster local messaging.

Our help is much more than money and supplies. It’s the doctors and public-health professionals trained, thanks to U.S. money and educational institutions. It’s the experts we have deployed worldwide or who are assisting global counterparts via teleconference. Our embassy in Cameroon includes a large office of the U.S. Centers for Disease Control and Prevention (U.S. CDC) which is coordinating closely with the Ministry of Public Health to help the country respond to COVID-19 and prevent further spread of infection.

In Cameroon, U.S. CDC, along with the U.S. Agency for International Development (USAID), has invested over $45 million (26.5 billion CFA) since 2014 to expand the capacity of the health sector to prevent, detect, and respond to infectious disease outbreaks.  U.S. funds built Cameroon’s Public Health Emergency Operation Center, which is coordinating the COVID-19 response. Field epidemiologists who are tracking the contacts of COVID-19 patients were trained by a U.S.-funded program on surveillance and case investigations.  U.S. support has significantly expanded laboratory capacity, enabling Cameroon to be one of the first countries in the central African region able to test for COVID-19. USAID and U.S. CDC continue to announce new donations of funds and supplies in response to laboratory and hospital needs. U.S. CDC has provided over $1 million (590 million CFA) to fund COVID-19 response efforts and procure supplies in recent weeks and USAID announced $1.4 million of assistance.

Our country continues to be the single largest health and humanitarian donor for both long-term development and capacity building efforts with partners, and emergency response efforts in the face of recurrent crises. This money has saved lives, protected people who are most vulnerable to disease, built health institutions, and promoted the stability of communities and nations.

Our aid helps people in the direst circumstances. For instance, the U.S. government works with NGOs to deliver medicines, medical supplies, and food to people in conflict zones in the Middle East, Asia, and Africa, including in several regions of Cameroon affected by violence.

America’s unsurpassed contributions are also felt through the many international organizations fighting COVID-19 on the front lines.

The United States has been the largest backer of the World Health Organization since its founding in 1948. We provided more than $400 million to the institution in 2019 – nearly double the second-largest contribution and more than the next three contributors combined.

It’s a similar story with the U.N. Refugee Agency, which the United States backed with nearly $1.7 billion in 2019. That’s more than all other member states combined, and more than four times its second-largest contributor.

Then there is the World Food Program, to which the United States contributed $3.4 billion last year, or 42 percent of its total budget. That’s nearly four times the second-largest contributor. We also gave more than $700 million to the United Nations Children’s Fund (UNICEF), more than any other donor.

We are proud that when these international organizations deliver food, medicines, and other aid all around the world, that too is largely thanks to the generosity of the American people, in partnership with donor nations.

In addition to our health security assistance in Cameroon since 2014 described above, the United States is the top health donor in Cameroon, investing $390 million over the past 20 years to assist with Cameroon’s fight against HIV/AIDS, animal-borne infectious disease threats, and various tropical diseases.  Encompassing all development sectors, the United States has invested more than $960 million in Cameroon in the past 20 years.

Of course, it isn’t just our government helping the world. To face the current crisis, American businesses, NGOs, and faith-based organizations have given at least $1.5 billion to fight the pandemic overseas. American companies are innovating new technologies for vaccines, therapeutics, diagnostics, and ventilators. This is American exceptionalism at its finest.

As we have time and time again, the United States will aid others during their time of greatest need. The COVID-19 pandemic is no different. We will continue to help countries build resilient health care systems that can prevent, detect, and respond to infectious disease outbreaks. Just as the United States has made the world more healthy, peaceful, and prosperous for generations, so will we lead in defeating our shared pandemic enemy, rising stronger in its wake.