Emergency Information for American Citizens
Visa Information Update
PreviousNext
Emergency Assistance
Local Emergency Information and Contacts
Alerts for U.S. Citizens
Read alerts for U.S. Citizens
Visit Travel.State.gov for More Information
New Guidance for Visa Pickup
Beginning May 18th 2022, All approved visas will be picked up from DHL Yaoundé Immeuble Stamatadas Building, Hypodrome/ Hotel de-Ville. There is no additional fee for this service.
Pick-up times
The applicant may pick up their visa at their convenience: Monday to Friday 08:00 – 17:00 or Saturday 09:00 – 14:00.
Contacts for Questions and Concerns
Please contact DHL at +237-233-500-900/01/02/03 or fae_contactus+cm+info+en@visaops.net with any question or concerns.
PreviousNext
U.S. Participates at the “Kanuri but not Boko Haram” Event Organized by the Voices for Peace Project
By U.S. Embassy in Cameroon
4 MINUTE READ 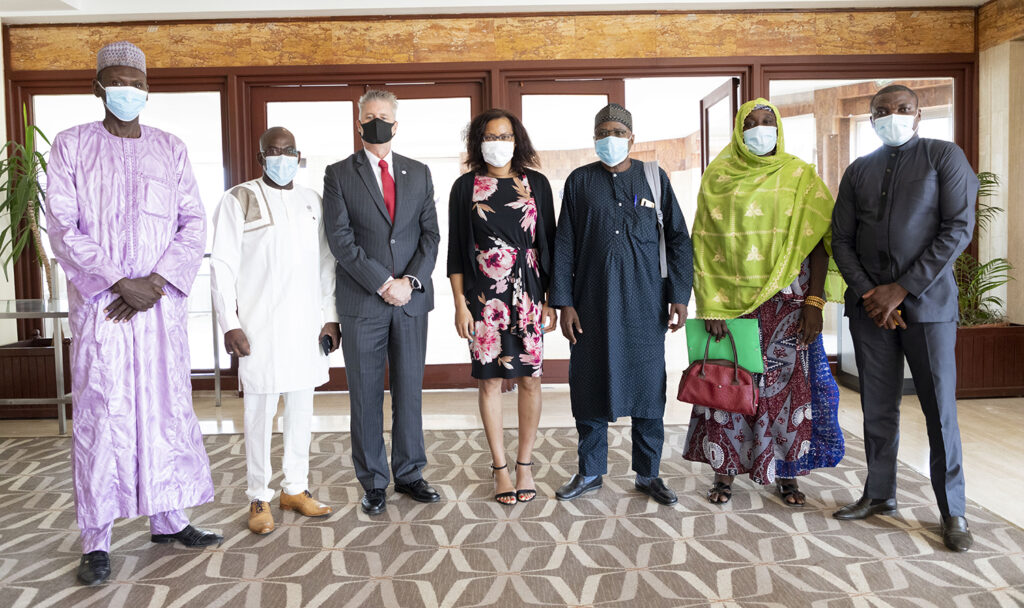 Today, the U.S. Embassy participated at the “Kanuri but not Boko Haram” event organized by Voices for Peace (V4P).  The V4P project has successfully worked at the community level and across the region to reduce stigmatization of Kanuri since 2019.   It is financed by the United States Agency for International Development (USAID) and implemented by Equal Access International (EAI).  With the V4P project slated to end in December 2021, the “Kanuri but not Boko Haram” event aimed to seek buy-in and recognition from key international actors on the importance of addressing the stigmatization of Kanuri.  Tackling this challenge strengthens social cohesion and builds this community’s resilience to violent extremism.

The event screened highlights from the documentary “Kanuri but not Boko Haram,” which conveyed the dynamics and consequences of Kanuri stigmatization.  The documentary is available on YouTube in English and in French.  During the event, U.S. Chargé d’Affaires a.i. Vernelle Trim FitzPatrick stated, “Reducing the stigmatization of Kanuri people is not a question of benefiting a single group but a necessity to serve the advancement of all parts of larger society.  In this light, the U.S. government invites and encourages you and your various organizations to closely consider how to integrate the de-stigmatization of Kanuri in your strategies and daily actions.”

The USAID-supported Voices for Peace (V4P) regional activity is implemented by Equal Access International in Burkina Faso, Chad, Niger, and Mali, in addition Cameroon.  It aims to counter violent extremism and promote democracy, human rights, and good governance by leveraging both traditional and new media at the community level in areas affected by violent extremism.  V4P works with local partners to address drivers of violent extremism, such as poor information flow between authorities and the population, community conflicts, and marginalization of certain societal groups.  V4P’s work in Cameroon has highlighted the plight of the Kanuri people, who are often perceived as supporters of Boko Haram.  The stigmatization of Kanuri people as Boko Haram supporters poses a major obstacle for their effective integration into Cameroonian society, particularly in the North and Far North Regions.