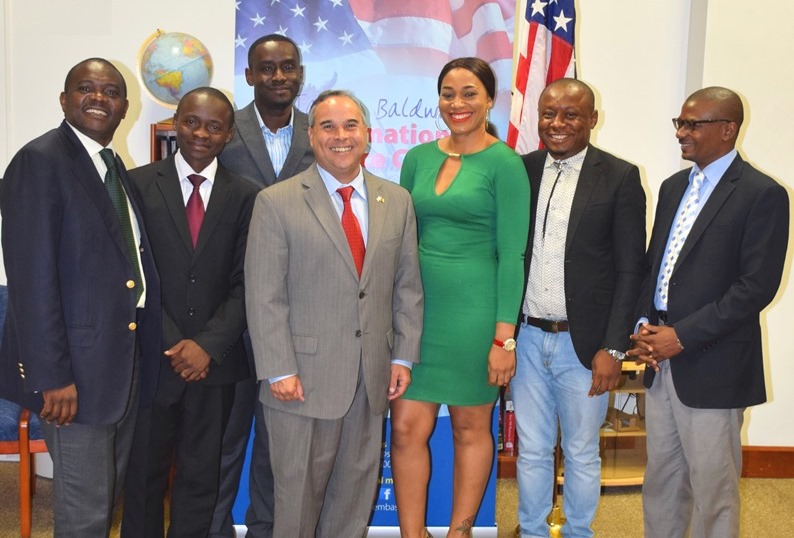 On May 9, 2017, the U.S. Embassy in Yaounde welcomed Cameroonian film producer, CEO and Founder of the Cameroon International Film Festival (CAMIFF) Agbor Gilbert Ebot, who was accompanied by  Stephanie Tum, Cameroonian actress, Dr. Georges Madiba, Director of Cinematography at the Ministry of Arts and Culture, and Archil Tchinda of the Ministry or Arts and Culture, and CAMIFF’s coordinator, Eno Ojong Charles. Public Affairs Officer Roberto Quiroz II and Cultural Affairs Specialist Mathias Tientcheu met with the distinguished guests and lauded their leading efforts to promote the Cameroonian film industry through such initiatives as CAMIFF.  Mr. Ebot thanked the U.S. Embassy for “helping to promote the social cultural relationship between Cameroon and the U.S. through cinema,” and observed that among Cameroonian youth there is a lot of talent that can advance the film industry in partnership with others around the world, from Nollywood in Nigeria, Bollywood in India, and Hollywood in the United States.  “Our Cameroonian talent and ideas in film are unique, and we want to invite all Cameroonians to share our vision to see this key industry grow. The potential contributions of our people to film are endless. We thank the Ministry of Arts and Culture and Dr. Georges Madiba in particular for their support.”

Mr. Quiroz said: “In our interconnected world, we celebrate our diversity and unique cultures through film, which is why the Oscars celebrate international films.  Who knows who will become the Steven Spielberg and great internationally famed actors and actresses of Cameroon in five or ten years? We celebrate the vision of those who are promoting that vision here in Cameroon, as Mr. Agbor Ebot and his team are doing today.  Cameroon is a nation rich in talent among its youth, and we have been especially impressed to see the artistic talent of so many young people through theater, film, and the arts, among other sectors. The United States salutes Mr. Agbor Ebot and Ministry of Arts and Culture officials for their perseverance, dedication, and commitment to celebrate and promote Cameroonian talent through film.”