Emergency Information for American Citizens
Visa Information Update
PreviousNext
Emergency Assistance
Local Emergency Information and Contacts
Alerts for U.S. Citizens
Read alerts for U.S. Citizens
Visit Travel.State.gov for More Information
New Guidance for Visa Pickup
Beginning May 18th 2022, All approved visas will be picked up from DHL Yaoundé Immeuble Stamatadas Building, Hypodrome/ Hotel de-Ville. There is no additional fee for this service.
Pick-up times
The applicant may pick up their visa at their convenience: Monday to Friday 08:00 – 17:00 or Saturday 09:00 – 14:00.
Contacts for Questions and Concerns
Please contact DHL at +237-233-500-900/01/02/03 or fae_contactus+cm+info+en@visaops.net with any question or concerns.
PreviousNext
USAID is celebrating its 60th anniversary
with a retrospective statement on 60 years of fruitful partnership with Cameroon since 1961
By U.S. Embassy in Cameroon
4 MINUTE READ 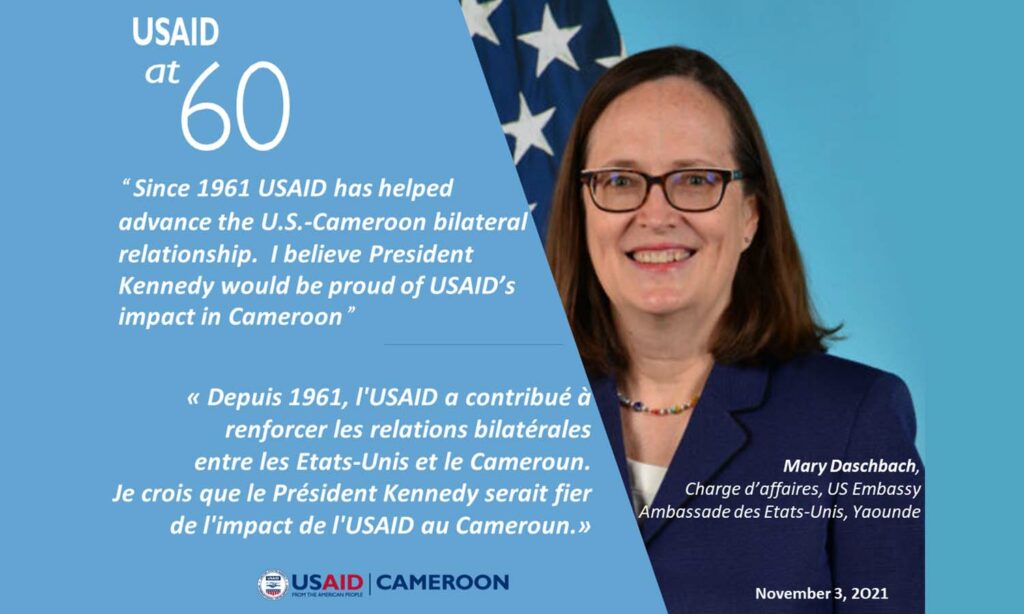 YAOUNDÉ, November 3, 2021—The United States Agency for International Development (USAID), the world’s premier international development agency is celebrating its 60th anniversary since its creation by President John F. Kennedy on November 3, 1961. USAID opened its offices in Cameroon in 1961 with a budget of 7.9 billion CFA ($14 million) and since then has proudly provided a total of 776.9  billion CFA ($1.38 billion) in development and humanitarian assistance to the people of Cameroon.

In the late 1960s and 1970s, USAID contributed to major development projects such as road and railway construction, including the Kumba-Mamfe road in the Southwest Region and the Trans-Cameroon railway connecting Belabo to Ngaoundéré and Douala to Yaoundé. USAID was also a catalyst in Cameroon’s education sector, participating in the building of the University Teaching Hospital of Yaoundé (known as CHU), the University Center in Dschang (current University of Dschang), and construction of the Institute for Research, Agriculture and Development (IRAD) in Yaoundé (former National Advanced School of Agriculture).

In the 1980s and early 1990s, USAID helped create Regional Funds for Health Promotion (former Provincial Pharmaceutical Supply Centers). In the mid-1990s, USAID cut its total workforce by over 30 percent and closed 24 missions worldwide, including Cameroon, due to changing development priorities and the need to concentrate increasingly scarce resources. Nevertheless, USAID continued investing in Cameroon through its offices in Washington and Accra in the following sectors: health; environment and natural resource management; economic growth and trade; peace and governance; and humanitarian assistance.

In 2020, USAID re-opened its office in Cameroon with a budget of 64.2 billion CFA ($114 million).  In the past year, USAID protected more than 1.9 million children in northern Cameroon from malaria by providing a monthly preventative treatment given to children under the age of five during peak transmission season. USAID also provided humanitarian assistance to 1.4 million refugees, internally displaced persons and host communities. To date, USAID has provided approximately 9.5 billion CFA ($16.8 million) to strengthen Cameroon’s response to the COVID-19 pandemic. USAID promotes peace, tolerance, good governance, and human rights in Cameroon reaching an estimated 2.5 million listeners through partnerships with 16 radio stations in the Far North region.

For more information on USAID’s activities in Cameroon, visit: https://www.usaid.gov/cameroon.