Emergency Information for American Citizens
Visa Information Update
PreviousNext
Emergency Assistance
Local Emergency Information and Contacts
Alerts for U.S. Citizens
Read alerts for U.S. Citizens
Visit Travel.State.gov for More Information
New Guidance for Visa Pickup
Beginning May 18th 2022, All approved visas will be picked up from DHL Yaoundé Immeuble Stamatadas Building, Hypodrome/ Hotel de-Ville. There is no additional fee for this service.
Pick-up times
The applicant may pick up their visa at their convenience: Monday to Friday 08:00 – 17:00 or Saturday 09:00 – 14:00.
Contacts for Questions and Concerns
Please contact DHL at +237-233-500-900/01/02/03 or fae_contactus+cm+info+en@visaops.net with any question or concerns.
PreviousNext
USAID Supports Local Ownership in Promoting Lifesaving HIV/AIDS Work to Children and Families in Cameroon
By U.S. Embassy in Cameroon
3 MINUTE READ

The handover ceremony was held on Thursday, June 3 at the Archdiocese complex.  Attendees included Archbishop Joseph Atanga of the Metropolitan Archdiocese of Bertoua, USAID/Cameroon’s Country Representative Paul Richardson, Bertoua’s Mayor Jean Marie Dimbele, and CRS Country Representative Caroline Agalheir.  Paul Richardson commented on the significance of the event, noting that, “The U.S. government remains committed to supporting Cameroonians with a range of services that touch on health, education, socio-economic needs and improving the overall well-being of children living with and affected by HIV/AIDS.” 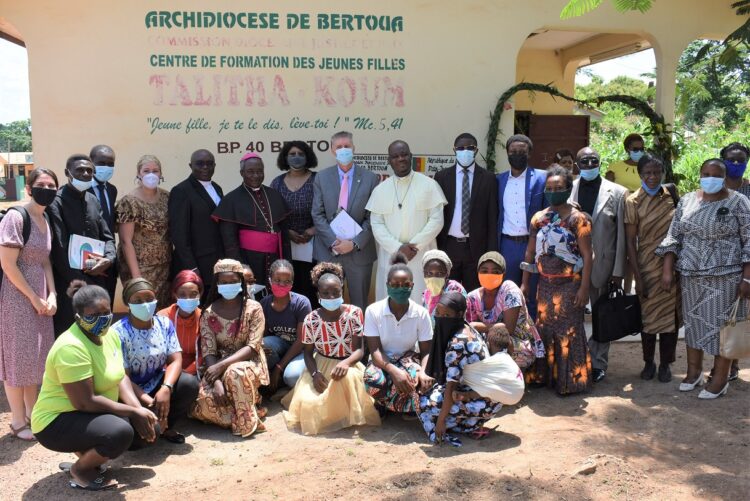 Since 2014, USAID and CRS have provided critical services to over 60,000 children and families living with and affected by HIV/AIDS through the KIDSS activity.  As part of the agreement, CRS must gradually transition management and oversight responsibilities to a Cameroonian organization to promote local ownership and support sustainability.  Since January 2020, CRS has supported the NECC to become ready to take on the additional responsibilities.  Today’s event specifically transfers KIDSS’ management responsibilities in the East and Adamaoua Regions from CRS to the NECC.  The entire program will be  transitioned to the NECC by fiscal year 2023.